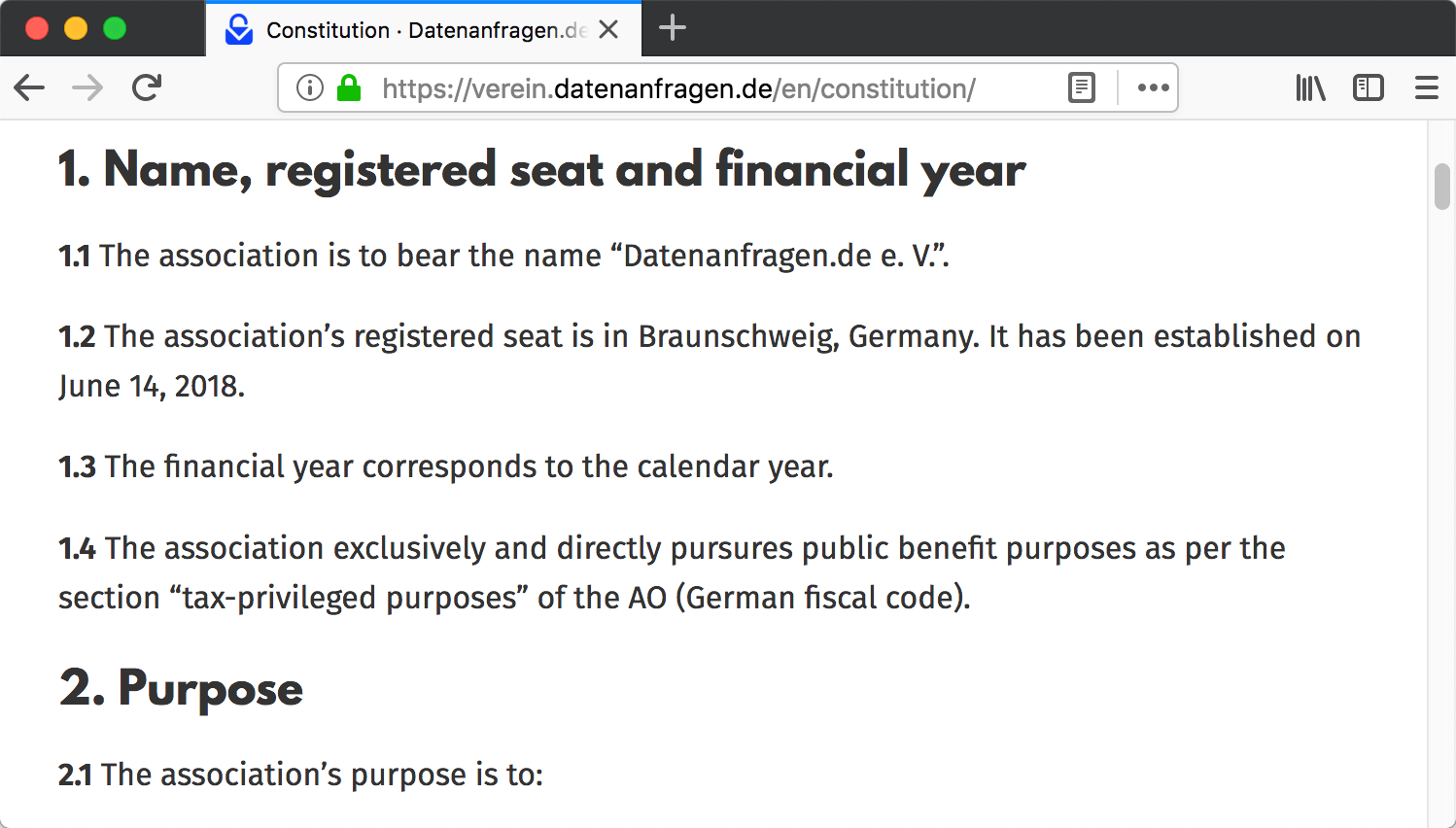 Published: 2019-03-06T14:54
Note: This post contains a translation of the model constitution for a registered tax-priviledged association under German law. It wouldn't make sense to write the introduction and title for a topic like this in English, thus I have decided to keep them in German.

1.1 The association is to bear the name “Musterverein zur Förderung des Förderungsgegenstandes e. V.”. It is to be entered into the register of associations of the district court of Musterhausen.

1.2 The association’s registered seat is in Musterhausen, Germany. It has been established on Jan 01, 1970.

1.3 The association is politically, ethnically and confessionally neutral. It is a member of Deutscher Verband der Mustervereine.

1.4 The financial year corresponds to the calendar year.

1.5 The association exclusively and directly pursures public benefit / charitable / religious purposes as per the section “tax-privileged purposes” of the AO (German fiscal code).

2.1 The association’s purpose is to be an example for other associations.

These goals are achieved specifically by providing an English translation of the model constitution for associations.

2.2 The association acts for the common good and does not pursue its goals primarily for the purpose of profit making.

2.4 No one may be favoured through payments which do not serve the association’s purpose or are disproportionally high.

2.5 People acting voluntarily are only entitled to the compensation of their own documented expenses.

Any natural person or legal entity may become a member. The board makes the final decision on the membership application.

a) with the death of the member,
b) by voluntary withdrawal,
c) by removal from the list of members,
d) by exclusion from the association, or
e) in the case of legal entities, by their dissolution.

Voluntary resignation requires a written declaration to a chairperson. It is accepted by the end of a calendar year subject to a cancellation period of three months.

A member may be removed from the list of members by decision of the board if, after two reminders, they are still in arrears with the payment of the membership fee. The member must be informed of the removal in writing.

Membership fees are to be collected from the members. The amount of the annual fee and its terms of payment are determined by the general assembly.

Honorary members are exempt from the obligation to pay membership fees.

6. Organisational bodies of the association

The association is comprised of the following bodies:

a) the board, and
b) the general assembly.

The board in the sense of § 26 BGB (Germany) is comprised of:

The association is jointly represented judicially and otherwise by two members of the board.

The combination of multiple board positions in a single person is not permitted.

8. Term of office of the board

The executive board is elected by the general assembly for a period of two years from the day of the election. It will remain in office until the election of a new board.

9. Decision-making process for the board

In general, the executive board makes its decisions during board meetings, which are summoned by the first or second chairperson in writing by telephone or by telegraph. A notice period of three days must be adhered to in all cases. No prior notification of the agenda is required. The executive board possesses quorum if two board member, including the first or second chairperson, are present. Decisions are taken by a majority of the valid votes cast. In the event of a tie, the vote of the session chair will decide.

A decision of the executive board may also be made in writing or by telephone, if all chairpersons express their approval of the proposed provision.

Each member—including honorary members—present has one vote at the general assembly.

The general assembly is responsible in particular for the following matters:

a) accepting the board’s annual report; exonerating the board,
b) setting the amount and terms of the membership fees,
c) electing and dismissing the members of the board, and
d) deciding on potential amendments to the constitution, as well as a potential dissolution of the association, and
e) nominating honorary members.

11. Summoning of the general assembly

The regular general assembly is to take place at least once a year, perferably during the last quarter. It is summoned by the board through written invitation stating the agenda and with a notice period of two weeks. The period begins with the working day following the dispatch of the invitation. The invitation is deemed to have been delivered to the member if it is addressed to the last address the member has made the association aware of in writing. The agenda is set by the board.

12. Decision-making process for the general assembly

The minutes are kept by the recording clerk. If they are absent, the session chair appoints a minute-taker.

The voting method is set by the session chair. The vote has to be carried out in writing if at least one third of the members present and entitled to vote requests so.

Every duly summoned general assembly possesses quorum regardless of the number of people present.

Minutes are to be taken of the decisions of the general assembly. They are to be signed by the respective session chair and minute-taker. The minutes must contain the following information: Date and time of the assembly, the name of the session chair and of the minute-taker, the number of members present, the agenda, the individual voting results and methods. In the case of amendments to the constitution, the provision to be amended must be stated.

15.1 The dissolution of the association can only be decided in a general assembly with the majority of votes specified in section 12. Unless the general assembly decides otherwise, the first and second chairperson are jointly authorized liquidators. The above provisions apply accordingly in the event of the association being dissolved for any other reason or losing its legal capacity.

15.2 If the association is dissolved or is no longer eligible for tax privileges, the assets of the association are transferred to a legal entity under public law or another tax-privileged entity for use in the advancement of the democratic government as per § 52(2)(2.) AO (German fiscal code).

The above constitution was established at the founding assembly on Jan 01, 1970.

Signed by the founding members in Musterhausen on Jan 01, 1970.