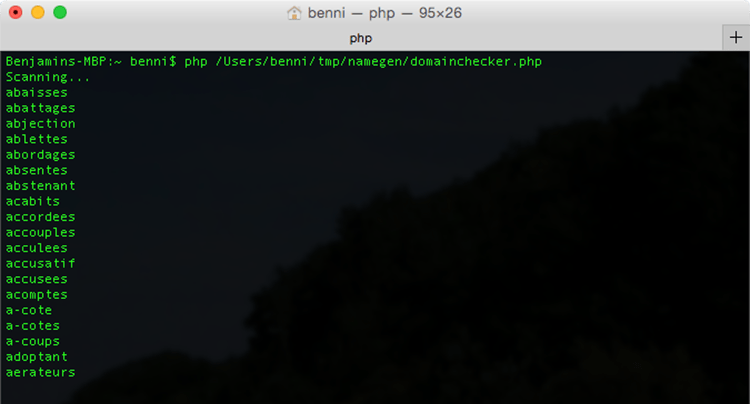 Scanning the web for ALL available French one-word domains

A while ago, I set out for quite an ambitious project. I needed a list of all domains containing just one French noun that are available as both .com and .de. The process seemed easy enough. Basically, I would have to

As it turns out, the project is not too hard once you’ve found the right tools. So in this article, I am going to share my experiences and the method I used for everyone who is either interested in this process or just likes reading about fun projects.
Just one more note before I start: Many of the scripts I used are not very nice and clean from a coding perspective, they are mainly quick-and-dirty implementations of what I needed. For my purposes, this was more than enough. Quite frankly, I don’t care if the scripts used in this projects are nice and high-performance C++ applications or just quickly hacked together PHP scripts. They both do their jobs just fine and originally, I didn’t intend to share them. But as I think this turned out to be quite an interesting project, I changed my mind. Enjoy! :)

Of course, obtaining a list of all French (or whatever language you might be interested in) words is the most fundamental step. After searching around for a bit, I found that most UNIX-based distributions have a /usr/share/dict directory that contains word lists. This also applies to my BSD-based Mac but, unfortunately, mine only had English word lists. And, even though, the accompanying README file told me a French word list is also available, the mentioned FTP server apparently seems to be offline:

So, I had to look around a bit more to eventually stumble across the wfrench Debian package. Obviously, Linux distributions also come with wordlists and as opposed to my Mac, they luckily have a well-managed package system that allows everyone to download the packages and extract the wordlist as a nice plain text file.
Note: These packages are of course also available for other languages. So, if you’re looking for a German wordlist, for example, you can use the wngerman package (a wogerman package is also available but that one follows old spelling rules).

Extracting nouns from the wordlist

Now this step seems very hard as it’s of course not easy for a computer to know word classes and you don’t want to manually sort a list of several hundred thousand French words for nouns. Luckily, there is a tool called TreeTagger that is able to tag sentences is a variety of languages (including French).

Using a node.js wrapper, I wrote the following simple script that takes our wordlist and outputs all nouns in that list to the console:

Now, all that was left to do was run the script and print the results to a text file: node treetagger.js > french_nouns.txt
Three things to note on that one:

After all that work, we still have to do the main part: Check whether or not the nouns we’ve found are actually available for registration. While there are some domain availability APIs offered by domain registrars, you would generally use whois for that purpose. If you query a whois server for a domain that is not registered, you will get a response like that (note that the response is different depending on the server):

This solution would be easy to implement in PHP via a socket connection, but there is one problem. As per our initial requirements, we said that the domain had to be available as .de and .com. While querying the .com whois server appears not to have a limit on the amount of queries in a certain time frame, whois.denic.de most certainly has and that limit is unfortunately quite strict. Luckily, I stumbled across freedomainapi.com. They offer a free API that outputs JSON, so it is easy for us to query that from PHP. Here is the simple script I wrote:

The final thing left to do was to remove all accents etc. as I didn’t want to query for IDNs. For that, I stole a function from WordPress. Conveniently, that function also works for languages other than French, so you can reuse my code more easily. The entire PHP script can be found here.

I will have to add two notes on this one as well:

And there you have it. That’s all you need to get a list of all domains containing just a single French noun that are available as .com and .de. Unfortunately, there’s not many good ones among them but it was still a fun project. :)