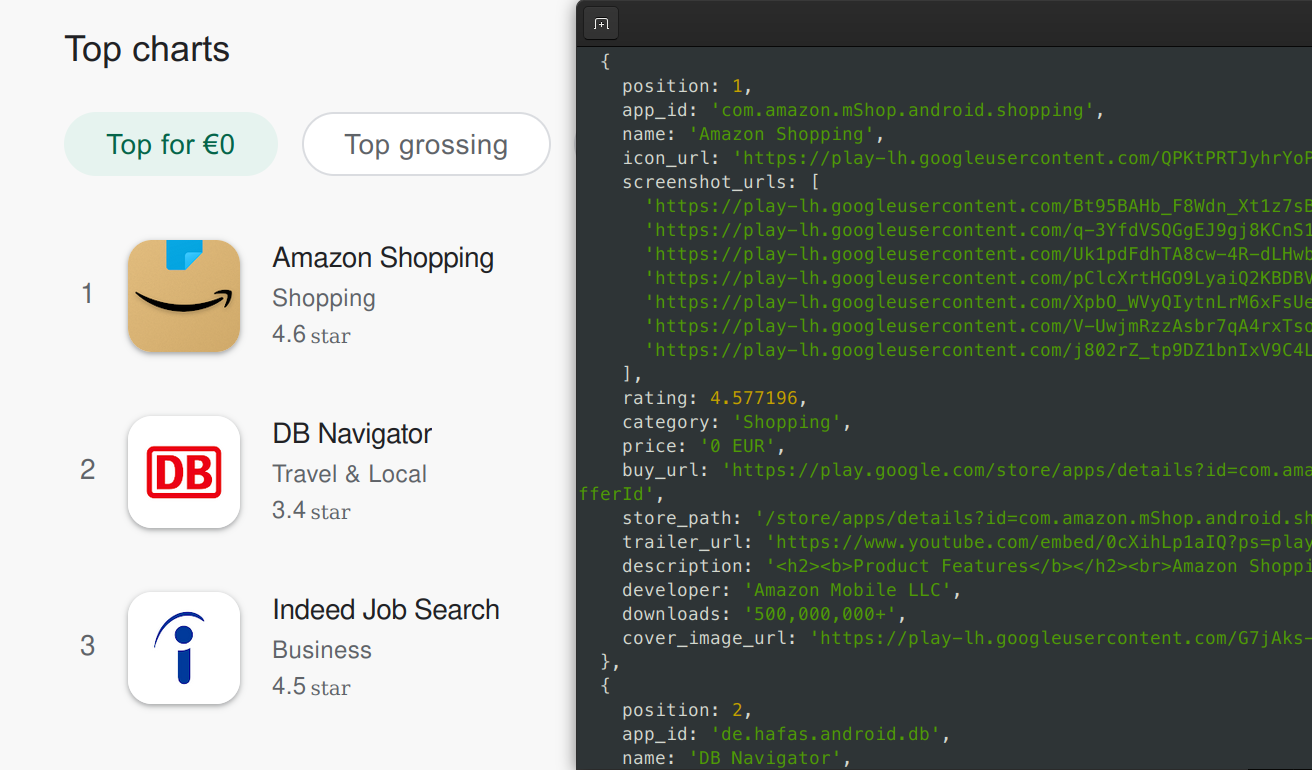 This blog post is a lightly edited version of this Mastodon thread.

If you just want a way to programmatically access Play Store top charts, you can go straight to the parse-play NPM package.

For my mobile privacy research, I need programmatic access to the rankings of which apps are most popular, the top charts.

On Android, I already had a scraper for the Play Store website that could fetch the top 200 apps per category. But a recent redesign broke that scraper, and the top chart pages I used don’t seem to exist at all anymore. Buying the data from a third-party company is not an option. Time to finally reverse-engineer the obfuscated APIs that the Play Store uses internally.

If you go to the Play Store website, there is still a “top charts“ section, but it now only lists the top 45 apps (which is not enough). Also, we can only see the ranking across all apps, not for individual categories.

However, those things might well only be UI limitations. It still makes sense to look at how that data is fetched and hope that the internal API used to display these charts is more powerful than that.

So, let’s reload the page but this time with the Firefox dev tools open to the network tab, so we can observe the network traffic. Since there’s a lot of traffic, mostly for images and scripts (which we don’t care about), we’ll filter for XHR requests only.

Apart from a whole bunch of tracking (bad but hardly surprising…), there are a few requests to an endpoint named batchexecute on play.google.com, each at around 100KB of data transferred. Those look promising.

The requests have an rpcids parameter with different values, namely vyAe2, qnKhOb, and w3QCWb. That might select what data is returned. But how do we know which one is for the top charts? Let’s try switching from “Top for €0” to “Top grossing”.

By the way: Shout-out to Manuel for figuring out what the other two rpcids do in their bachelor’s thesis. qnKhOb is also used in a few libaries. But seems like no-one has figured out vyAe2 yet. Anyway, back to doing just that…

Looking at the obfuscated request and response content is pretty intimidating.

The request is x-www-form-urlencoded with f.req, a string of various deeply nested JSON arrays without any labels to help us understand what is what. Just like Protobuf.

The response is similar but has three of those nested arrays, a few numbers, and garbage for the first line. The fourth line is the longest by far and seems to hold all data.

And scrolling to the right, we actually see references to our top apps.

I found this great post which has some general details on how batchexecute works. With that background info, this doesn’t look too bad.

But before we go any further, I tried just replicating the exact request the website did. In the dev tools, we can just right-click -> “Copy as Fetch” and paste that into a new NodeJS script, using cross-fetch as a fetch ponyfill.

And it does actually work! We get the same response.

If you want to follow along, I made a Gist with the code and output.

Next, let’s try to simplify the request to make it easier to understand what’s going on. I’ll start with the headers. Through simple experimentation I found that we only need one:

Next up: The query string. Here, it turns out that all GET parameters are actually optional and don’t seem to affect the request (apart from rt which sets the response format, see the previously mentioned blog post—but leaving it empty is better even). This is easy so far!

But now we do actually need to tackle that unwieldy request payload. To make it a easier to read, I’ll URL-decode it and use two nested JSON.stringify() calls to generate the string. Trying to understand that huge mess in your head is nigh on impossible otherwise.

After formatting the file, the JSON object is now an insane 600 lines long—wow! How many parameters can there be for fetching app top charts?! But at least we have a chance at understanding it now. Gist with the formatted request body

Most of the length comes from an array at the third level of the inner JSON array. If we collapse that, the payload looks a lot more approachable. We’ll treat that as a black box for now.

In fact: Those two array elements near the end look very interesting, don’t they? topselling_free definitely sounds like it controls the chart. Looking at the other two requests we observed confirms this:

And changing the value in our code actually returns different values! One parameter down.

For some reason, Google seems to hide the category pages in the new Play Store design. But we can still find lists of the categories and their ID.

Using one of the other category IDs in our code also works. We can now fetch top charts for different categories, which is not possible in the UI anymore. Progress.

We’ll leave the request for a moment to look at the response. If we again format the line with the data as JSON, and then also format the nested JSON string, we can collapse sections of the response to exploratively get an understanding of it. Gist of the formatted response

Nested quite deeply in there, we find an array of entries that distinctly look like they represent the apps on our top list.

Each entry lists a bunch of metadata on the app, like ID, name, rating, category, description.

With that, we can basically decode the response already. All that’s left is figuring out what each value means (easy enough with the app detail pages to compare against) and then writing code to grab them from within that mess of a JSON array. I’ll spare you the gory details.

But one more exciting observation: The array with the apps has 50 entries. We can already access five more apps than through the web UI. Surely that means that we can grab even more if we figure out the length parameter?

Why yes, we can! By chance, I noticed that the request payload contains a 50 near the beginning.

And what do you know? Changing that value does indeed influence the length of the list returned in the response. That length seems to be capped to 660 on the server. But that’s way more than we could access before, so I’m happy.

It also just so happens to be about the length of the charts of most third-party companies. Whoops, now you don’t to pay them anymore for that. Sorry not sorry…

We’re finally almost done. Currently, we get the results in the language and for the country that Google detects we’re it. It would be nice to control that.

Luckily, that’s also easy: You can just append the well-known hl (language) and gl (country) parameters that Google uses in many places to the query string of the URL. Their values are the typical two-letter ISO codes. So for example, to get the top charts for the United Kingdom in English, you’d use:

Remember how we ignored a huge part of the request payload? I won’t bore you with the details but by trial-and-error I discovered that that is entirely irrelevant for the request and you can just leave it and a bunch of other stuff out completely. Gist with the simplified request code

Look at how ridiculously more simple we can make the request compared to what the Play Store website sends. Now, I don’t know what all the removed values do. But I wouldn’t be surprised if they were for all tracking…

If you want to access the top charts of Android apps on the Google Play Store, I wrote a nice JavaScript library that you can use: parse-play

With that, it’s as easy as: